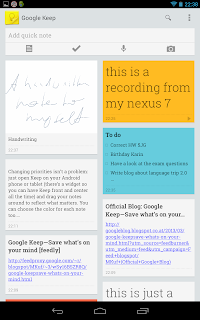 Google Keep has finally arrived and of course it will be compared to other note-taking apps like Evernote and MS OneNote. So, how will Google Keep fare in comparison to these apps?

First of all, Google Keep has that typically googley beta feel to it (voice memos didn't play back in Chrome on the PC) and there is some important functionality missing to make it a full-fledged note-taking app like Evernote, in particular the ability to create multiple notebooks. What's more, it isn't fully integrated in Google Drive yet. You have to get to the web interface via a separate URL for the time being, even though Google promised on their official blog that integration is coming soon.
https://drive.google.com/keep

Missing features like multiple notebooks as well as collaborative features might well come with a future Google Drive integration. Furthermore, I will still be using Google Task as there is no Calendar integration yet.

That said, Google Keep does have a lot to recommend. The mobile App is faster than the Google Drive app and has automatic syncing. Moreover, it does have a nice user interface which is reminiscent of both the Google+ app (tiles view) and the Gmail app (swiping to archive a note). So, while Google Keep is not particularly useful for systematic note-taking (Google Docs or Evernote would be more useful here), it does a very good job at quick and easy note-taking including:


There is plenty of room for future improvement, in particular when it comes to integration with other Google Services :
Google Keep probably won't win over many Evernote users, but it is a very nice addition to Google Docs, which speeds up note-taking and makes it more user-friendly than within the Google Drive UI.